The Double Tax Treaty between Cyprus and Austria contains a rather unique provision which allows Austrian residents to repatriate profits realized in Cyprus, back to Austria free of tax.

Article 8 of the Treaty provides that the profits from the participation as silent partner (Stiller Beteiligter) in a Cyprus legal entity are free from taxes in Austria.

This provision allows the minimization of the tax liability in Austria and in certain cases it allows the Austrian resident to pay no tax at all.

The first step is to create a Cyprus Partnership. This is similar in legal character to the Austrian Komanditgesellschaft.  The General Partner (Komplementär) has unlimited responsibility while the limited or silent partner (Kommanditist)  is liable only up to the amount of his contribution to the capital.

The net profits of the Active Company  are subject to tax at the applicable corporate tax rate in Cyprus,( currently at 10%).

After tax the profits are distributed by way of dividend payment to the Partnership. According to the law the dividends received by the Partnership are completely tax free.

The Partnership now will pay out to the partners their share of the profits (Gewinnentnahme). Thus the Austrian Partner (Kommanditist) receives his share of profits officially in Austria .. He will include it also in his tax declaration in Austria but the amount so declared is tax free in Austria. The only disadvantage is that it may push   his income tax progressive scale a step higher.

Summarizing and concluding it may be said that the above method is an effective way of channeling profits from international operations back to Austria free from tax in a legal and transparent way.

The above described model has been tested successfully for the last three years both in Cyprus and Austria. 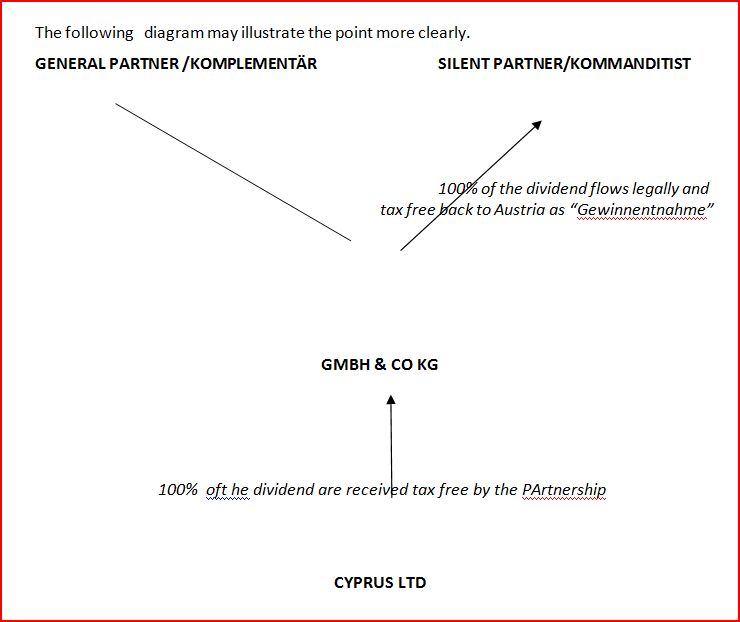 Making use of other Double Tax Treaties

The effect of the above mentioned advantages are amplified if one considers the additional benefits that can be reaped from the use of the Wide variety of Double Tax Treaties which Cyprus has concluded with large number of countries including the former  former Eastern-Block Countries, the former Soviet Republics and Russia.

An interesting example is the Ukraine. The DTT between Cyprus and the Ukraine provides that the Ukraine will not impose any withholding tax on investments there. This in effect means that the profits from the Ukrainian investment are remitted to Cyprus in full and are taxed there at 10%

If the investor is an Austrian resident such profits can be remitted to Austria legally without being subject to Austrian tax as already explained in the preceding paragraph..

0% tax on profits from trading in securities.

A resident of Austria wishing to trade with securities in the international markets can do this through a Cyprus company. The profits remitted to Cyprus are completely free of tax.  Utilising the model  described in the first paragraph an Austrian resident can ensure that these profits are legally remitted back to Austria free of tax.

Again if the ultimate beneficial owner of the dividends is an Austrian resident the method explained in the first paragraph can be utilized in order to channel the dividend to Austria in a legal tax free way .